Many times a machinist is required to machine features into a part that are located in a radial pattern instead of in a line. Examples of such features are the flats on a nut, the teeth on a gear or the splines on a shaft. The Sherline indexing attachment is a unique design that provides a very economical means of accurately rotating a part so that these kinds of features can be machined.

The attachment consists of an indexing head and a tailstock mounted on a 12″ long dovetailed bed. Also included is a rack gear that is used to measure radial movement, a gear tooth cutter holder and a high-speed steel tool blank. The indexing head utilizes a spindle with a #1 Morse taper and a 3/4-16 male thread identical to the spindles on the Sherline lathe and milling machines. This enables the use of all the Sherline accessories such as the
faceplate, 3- and 4-jaw chucks, Jacobs drill chuck, and centers with the indexer. A built-in mechanism detents the spindle every 5°, and there is also a red laser engraved collar that reads rotation in 1° increments.

The rack gear mentioned previously provides a means of accurately positioning the spindle where positioning in other than 5° increments is required. The gear inserts into the indexing head and engages an index gear. This transfers the rotary motion of the spindle into linear motion that can be measured with the depth rodof a Vernier caliper. Simple calculations then permit accurate indexing to an infinite number of positions. 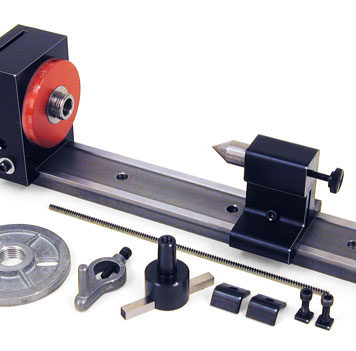