Because backlash is a more critical problem in CNC, the normally recommended .003″ to .005″ of backlash on the leadscrew might not be acceptable in some instances. This modification to the leadscrew and the addition of a locking lever allows adjustable control over the leadscrew backlash, making it possible to reduce it to as little as .001″.

The new upgrade is easily installed, requiring no new holes. The saddle nut securing screw is removed and a longer one going through a hole in the locking plate replaces it. A pin on the end of the locking arm goes into a hole in the locking lever which is installed on the leadscrew. Once the lever is positioned to the desired location removing as much backlash as is preferred, it is locked in place with a socket head cap screw.

If you are replacing a worn out saddle nut on an older lathe, this new system will upgrade the function of your machine at the same time. It can be used on both manual and CNC machines. Even if your saddle nut is not worn out, you might want to consider adding this feature to make it possible to lock the saddle on the leadscrew and to control backlash even in manual operations.

The locking lever and securing arm allows the leadscrew to be secured in the locked or unlocked position or any position in between to control backlash. Included is the new lock plate which attaches to the saddle using a longer bolt that goes through the saddle and into the saddle nut. The lever arm is locked in position using a socket head cap screw. 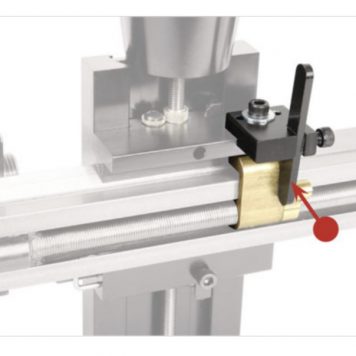